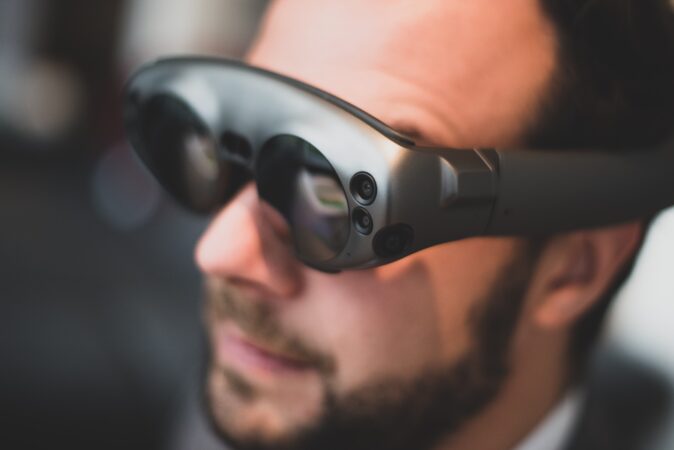 Magic Leap was previously known for its theatrics and lofty promises, but the lavishly funded but beleaguered business has spent years attempting to return to earth. Magic Leap 2 is a significant upgrade over the previous edition, with more vibrant graphics. Furthermore, the device’s broader range of vision allows users to see more of the digital world blended into the actual one, making it more immersive.

Like almost every other AR firm, Magic Leap envisions creating a pair of self-contained, normal-looking glasses for the mainstream market.

The Magic Leap 2 comes with a set of dark grey goggles attached to a puck-like computer that may be hung from a shoulder strap or clipped to a belt, just like the Magic Leap 1. These goggles bend light from small LCOS screens through stacked lenses, projecting holographic pictures into the environment. But they’re doing it in a much more condensed form.

The 3D imagery observed while wearing the headset was outstanding in clarity and color richness. In addition, the writing on the floating menus in front of me was clear and easy to see. It also gives the widest field of view of any AR headset, at 70 degrees.

The headset appears to deliver on its most promising promise: a more natural-feeling field of view.

The developers at Magic Leap have done some crucial work with dimming technology, which improves the clarity of the pictures even more. While VR glasses create a dark, closed-in experience, AR glasses are entirely open, letting in all of the light from the world around you. But, of course, that light must compete with the digital 3D images displayed by the optics.

The truth of the matter is that there are always difficulties to account for within this world. Startups have to dream big and they must focus on themselves to make sure that they are hitting the right metrics.

At the same time, it is always best to be like Apple, a firm that started by selling a product that was in demand and then continued to innovate and find what the users wanted overtime. It is not easy to run a large business but it is necessary to think about each aspect and how you will create value over time.

It is interesting to see how to incorporate this into the risk calculus. How can one see if there is innovation or if a firm is burning through a lot of cash? It is something that investors must think about over the long term.